Hope and the Rejection of Utopia

One of the puzzling questions raised by the story of Adam and Eve is why they would reject the worry-free existence of an immortal life in Utopia for a life of struggle that can only and ultimately end in death.

It’s not a difficult question upon reflection, though among many of my Christian friends an immortal life in which every want is satisfied is their vision of God’s heaven. Is this what heaven is like? Many Christians certainly read the Garden of Eden story as a heaven of sorts – if only a hint of what the afterlife affords. But Eden is not the paradise we have come to imagine as this story has unfolded over the millenia. Its depiction is certainly and starkly dickensian – an immortal life digging irrigation ditches and carrying buckets of water to and from those same ditches – forever. As portrayed in the Hebrew Bible, the Garden of Eden is little more than a plot of land to which the primordial couple is condemned to service for all time.

But, even if you acknowledge the hard truth of the biblical depiction of immortal life in Eden, there exists a larger and more serious problem with a life in Eden – paradisical or otherwise. Paradise can not exist in the absence of hope and in the absence of hope the human spirit cannot flourish. To understand the bleak vision of immortality, we need to familiarize ourselves with Xenophon, a historian and student of Socrates. In about 470 BCE Xenophon wrote a short dialog called Hiero, the Tyrant. In this dialog, one of the main characters argues that a tyrant((In ancient Greek, the word ‘tyrant’ meant an authoritarian who ruled for his own, personal gain, but carried no pejorative connotation. King Solomon, for example, evolved into a king who ruled for himself. He garnered enormous wealth, had 700 wives and concubines, yet despite his wealth and station, died an unhappy, unfulfilled man.)) does not have access to the happiness enjoyed by those over whom he rules. Xenophon’s reasoning can be applied to the question of why the utopian life in the Garden of Eden was rejected by Adam and Eve.  To explain, I’ve replaced “Tyrant” with “Utopian”in my summary of Xenophon’s Hiero below:

The most striking characteristic of the Utopian is that he has little hope. For Xenophon, Utopians were worse off than Mortals. Take food for example. That the Utopian has at his disposal every conceivable type of food deprives the Utopian of the pleasant expectation of something he cannot obtain. Utopians can get anything they want and as a consequence they lack the anticipation of greater delights. A life in utopia offers no source of joy; just unending disappointment. What we see of Utopians is a life in which the hope for something better or greater does not exist.

Why does this matter? It matters greatly because the inability to hope leads to a lack of appreciation of the future. In a life of hopelessness the bleakness of the Utopian’s soul is complete. The mortal, by contrast, lives with the hope (and expectation) of a better tomorrow — more friends, a nicer house perhaps, or a more just and peaceful world. Mortal expectations create incentives that order their behavior to achieving those goals. Or to be more precise, hope and its expectations makes personal sacrifices not only possible, but desirable. The Mortal sacrifices and suffers in order to achieve something that otherwise could not be achieved.  But the Utopian does not know of hope; he has everything and therefore lacks purpose. The Utopian’s is a barren soul, incapable of understanding the joy of flourishing. 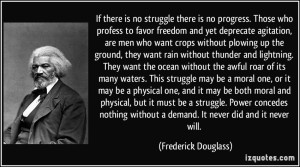 This, I would argue, forms the rationale behind God’s revelation that mankind rightly chose the mortal life. God’s author understood, as did Xenophon and the great Frederick Douglass, that only a mortal life can lead to flourishing because only the mortal life is possessed of hope. To struggle and achieve something hoped for enriches us far more than simply ordering something into existence. It is hope that drives us to struggle and therefore it is hope that leads to progress and human flourishing.

This entry was posted in Bible Study, Genesis, Heaven, Hope and tagged Adam and Eve, Genesis, Utopia. Bookmark the permalink.

This site uses Akismet to reduce spam. Learn how your comment data is processed.